A new home...for a while

By popular demand, I'm posting a shot of the country house to which I've moved temporarily. It's a wonderful place owned by a dear friend who has lived out of state for more than a decade now.  I remember walking around it when she was having it built 20 years ago and marveling at its post-and-beam construction.

It's a passive solar design and stays quite toasty most days (when toasty is desirable) and with just two bedrooms and two baths, it is the perfect size for me for now. 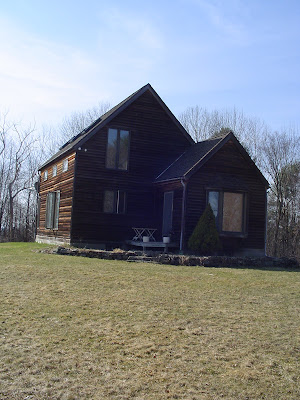 This is a view to the west.  The doorway you see isn't the front entry but is the den/bedroom on the first floor.  The front entry is around to the right in this photo, on the north side of the house.   The master bedroom and bath are in the loft on the second floor, and its tall double windows are seen above the double windows over the kitchen sink, to the left of the den door, in this shot.   It has a wonderful open plan with living/dining and kitchen occupying most of the first floor, along with the aforementioned den and adjacent full bath, closets and stairway to the loft and basement.   The windows on the left side of the building in this image frame the view to the south that I posted last time.

Downsizing from four beds/three baths was the plan and this is a wonderful transitional home to give me a good sense of what I will look for later in the year as I plan to relocate permanently to a warmer climate.

Yes, folks, the time has come for this born-and-bred Yankee to follow the sun to a land with very little snow.  The plan is to head eventually to South Carolina permanently before the year ends.

Why choose South Carolina (vs some other state)?  Several reasons, actually, as I find it offers a number of  lifestyle options that I have craved for quite a long time.  First, I have several friends and acquaintances of many years who either have moved permanently or who spend winters there, so I will arrive with something of a social network well started, if not firmly in place.  Second, I am, and have been since childhood when I first began to ride, a horse person - it's in my DNA - and the world of horses and horse sports are an intrinsic part of the culture where I'm headed.  I don't plan to own horses again, but I need to be around them and have them be an important part of any community where I live.  Third, as I approach my later years, the cost of living in the Northeast is simply becoming too onerous for me.   Fourth, I really am not a fan of snow.  I've grown up with it as an unavoidable component of my environment, but those aspects of it that I found entertaining as a child, are no longer appealing.  It's heavy, it's obstructive, it can be dangerous on roads and walkways, and most of all - it's just plain cold.  I want to enjoy my life, not be a slave to it, so I have resolved to go where the cost to simply exist is not so confining as it has become here and where the weather doesn't torture me with cold and snow.  Finally, the South appeals to me.  It has a wonderful, genteel pace and a fascinating history.  Quite honestly, I can make a home for myself just about anywhere, so I'm choosing the South.

Sure there are aspects relocating to the South that might prove challenging for a dyed-in-the-wool Yankee, but as with living the Northeast, there are always concessions to be made wherever one chooses to live.  That's a given, but I've reached a point in my life when it's well worth it to me to trade off  for good the bitter cold and shoveling ungodly amounts of snow for a much hotter summer, but a much more temperate winter.  It's pretty much that simple, so I hope to be whistlin' "Dixie" with a smile before the year's end.
at 4:26 PM 3 comments: Links to this post