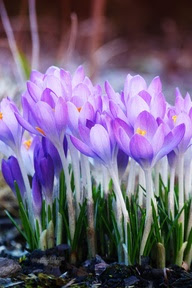 How did it get to be April already?  I just added a post...hard to believe that was a month ago.  Time is flying, but I couldn't be happier that Spring has arrived, on the calendar, at least.  It's starting to get a bit warmer here in eastern upstate New York...finally!  These aren't my crocuses (I wish), I found them on Pinterest (thank you to whoever originally posted them), but they reflect my current sentiments...bring on Spring flowers, starting with these little guys.

Even if April showers are the order of the day (or month), I'll take them if we do, indeed, get more flowers in May, and the leaves on the trees return to remind us that life is renewed, as always at this time of year.  It's such an optimistic time...can't complain about that!

I hope your Easter (or whatever holiday you're celebrating lately) is a wonderful one and spring brings you all the marvelous signs of the season we've been long awaiting!

Spring on the way... 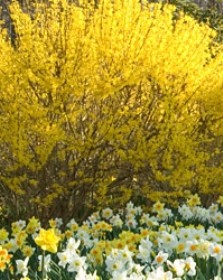 It's nearly here.  Some people can't wait for the holidays in December.  I have more excitement for the arrival of spring.  It can never get here soon enough for me.  When you live in the Northeast, where winters can be an on-going challenge between the cold - sometimes bitter cold - and the snow - sometimes interminable snow - the arrival of the birds, the slightly warmer temperatures are a godsend.

A month ago, in early Feburary, I was preparing to head south for a very short - extended weekend, really - trip to South Carolina.  I was due to leave very early on a Saturday morning on a flight that would take me from upstate New York directly to Charlotte, NC, followed soon after by a quick flight to Augusta, Georgia, which is the largest regional airport near my destination in southern South Carolina.  I was to return on a flight that would arrive late on Monday evening, giving me essentially 2 1/2 days of escape in a warmer, if not sunnier, southern town.  Well, the heavy snows that were predicted for the evening before my departure for points south were threatening do in most flights departing from upstate New York that Saturday, so I make some quick changes that pushed my departure back by a day, to Sunday, effectively reducing my trip to 1 1/2 days.  I debated whether to cancel the trip altogether, but opted to go ahead even with the shortened duration  since some escape is better than none.

I arrived at my destination with no trouble and enjoyed most of my visit to a small, very horsey town that I'd known of for many years but had never visited.  Then, mid-afternoon of the day of my departure, I got a text message from my airline advising that my early evening flight home had been cancelled.  Cancelled!  That meant, effectively, that I couldn't leave that day, and would have to settle for an early morning flight (way too early) the next morning.  One might have considered that fortuitous, but I really need to get home sooner rather than later, which meant I'd spend the better part of the next day flying, which is never my preference when I hadn't planned to take that as a day off and be traveling.  Oh, well...not much I could do accept make the best of it, so I did.

What was significant was that it was warm - not hot - but warm at my destination and that was a joy.  I always appreciate grabbing a few days somewhere warm by the time February rolls around.  It's the best way I've found to fight off cabine fever and the "midwinter blues" that invariable envelope me by late January.  I'm usually done with winter by that point, and this year was no exception.  Just get me to Valentine's Day - and that fun punch of bring ruby reds - and I'm ready for bright green, pastels, the fun of St. Patrick's Day and anything springy.

So it's nearly here - finally - and in another week we'll push those clocks ahead another hour, I'll be leaving the office in the daylight again, which always makes me happy.  Then the warmer weather, the buds of spring blooms - the crocuses and the daffodils won't be too far behind and life will begin anew...and none too soon.