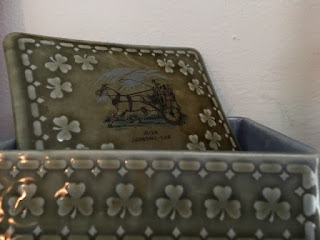 Hello, Spring - almost! I must say, it's a relief that the frigid temperatures and snows of winter are on their way out...finally! This wasn't the worst winter ever seen in this part of upstate New York, but it did feel much colder than others. I did break out the snowblower a couple of times, but not constantly, so I'm grateful for that. In fact, the last time we got any measurable snow here - about 2 inches - I opted to ignore it and let the warming sun and temperatures do the job. It worked, and in about two days there was no snow at all on my driveway - a most encouraging sign and a respite for my occasionally aching muscles.

A little over a year ago, I had a freak fall indoors at an event venue with a marble floor and fractured the top of my humerus (upper arm just below the shoulder). It healed very well over about 5 months, but the muscles still remind me that there had been some real trauma there, so I do feel them whenever I  lift heavier items or shovel snow, so I'm careful when I do that, if I do it. Having ridden and cared for horses for years, I was always accustomed to doing some real "heavy lifting", but I am not the 20-, 30-, 40- or even 50-something that I was back in decades when I did that, so the muscles are both long out of practice and are quick to let me know just how many years have passed since I was last in that regular habit.

Still, Spring is upon us and, after experiencing a rare 73-degree day last week, I'm am more than ready for it to kick in and leave the freezing temperatures far behind. St. Patrick's Day is the real beginning of Spring for me with all of its lovely "greenness" - shamrocks and the rolling land of the emerald "Old Sod" that is Ireland. My maternal grandmother was born and grew up in Northern Ireland before she emigrated to the US in her late teens, so I feel a real kinship to my Irish ancestors, though most scattered to other places - England and the US mostly - as far as I know. I have been to Ireland, but only once and for much too short of a visit. It was a wonderful experience, so I hope to return and visit the north (which I didn't get to earlier) and other areas that I haven't yet seen.

The Wade Pottery covered box shown above that I inherited from my mother is a classic example of a functional piece from the famous Irish pottery maker and always reminds me of my familial roots in Ireland. The cover features a typical "Irish Jaunting Cart" - I can just imagine my grandmother (or her mother or father) taking their small, stocky little cart or plow horse (or large pony) to town or to church in the early 1900s. My grandmother also was a horsewoman, of course, so, while that fascination skipped my mother (though she loved watching horse racing), it definitely landed firmly within my genes' DNA.

Of course, the whole St. Patrick's Day "corned beef and cabbage" traditional menu is entirely an American concoction as corned beef was, and is, not a "thing" in Ireland. Lamb was, and probably still is, the most prevalent meat consumed there, though the widely held perception of the questionable nature of Irish cuisine has long since given way to a real, and much-deserved, appreciation of some of the most wonderful indigenous dishes and foods. If you doubt me, go online and check out the cookbooks from the late Myrtle Allen and her daughter-in-law Darina Allen of the renowned Ballymalloe House on the southern coast near Cork, and its famous cooking school. They were, and still are, doing "farm-to-table" dining long before it was widely popularized in the US as something novel. Sadly, we lost Myrtle fairly recently, but she was a force and leaves a tremendous, lasting legacy in Irish hospitality and cuisine that Darina and her family have carried on.

It's more likely the Irish who migrated to American in the mid-late 1800s learned, like most of our earlier settlers in the New World, that "corning" beef (brining in liquid and seasonings and cooking over a low heat for hours) was a viable method for preserving the meat in order to extend its use for food consumption.

Still, old habits die hard, so here's my take on the traditional American corned beef and cabbage this year. I confess, I have found that unless I'm feeding a small army for the occasion, I have much more corned beef left over than I'd care to deal with (and have to eat for days), so - forgive me - I opted to go with just some thickly sliced corned beef from my grocery's deli department this year. (Heresy, I know, but I don't care.) Instead, I focused my energies on the accompaniments - none of which were boiled! Seriously, unless you are making mashed potatoes or potato salad, why would you boil them just to eat them that way? So plain and boring - ugh! I do love potatoes, though, so I prepared my usual roasted red potatoes, skins on, of course, and tossed with olive oil, balsamic vinegar, sea salt, freshly ground pepper, garlic and onion powders, and thyme before roasting. While they were roasting, I sauteed some chopped cabbage and sweet golden onion (Vidalia, in this case), and roasted carrots that I peeled, halved and chopped into approximately 1-inch segments, and tossed with the same seasoning as the potatoes, minus the balsamic vinegar, before roasting. I then chopped a few pieces of carrot into even smaller dice to add to the cabbage.

Rather than the usual intense mustard straight from the jar to serve with the corned beef, which is much too tart for me, I made a variation of a favorite Dijonnaise sauce - a cold sauce of mayonnaise, some sour cream, and a grainy Dijon mustard, which provides just the right creamy yet spicy blend to compliment the corned beef. (It's also great with ham and pastrami and mixed in potato salad - just sayin'.) You also could add grated or prepared horseradish to taste if you like your mustard sauce with even more of a kick. 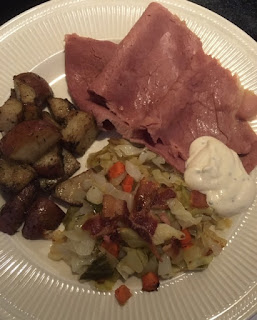 If you're not feeding a crowd, I heartily recommend this "short-cut" approach to the St. Patrick's Day feast as it requires none of the protracted cooking required - whether boiling (again - ugh!) or roasting low and slow (which is my preferred method when I must cook the corned beef). This whole meal can be pulled together in the time it takes to roast the vegetables in the oven at 375F to 400F for approx. 45-50 minutes (depending on the size of your pieces).  Just saute the cabbage and onion in a bit of butter while the other vegetables are roasting as I noted earlier. You can even warm the corned beef in the skillet for a minute or two right (to take the chill off from the fridge) after you've removed the cabbage-onion blend to a serving dish. Serve with your favorite Irish brew or beverage.