What a Nice Way to Celebrate...

I don't normally post about various events, giveaways, etc., but I'm making an exception here since I just noticed that Mary over at Urban Farmgirl is hosting a 100th post giveaway this week - a wonderful gift certificate from White Flower Farmhouse (which, oh, BTW, is located right here in New York, at Peconic on beautiful Long Island).

It can be overwhelming to deal with all the opportunities to participate in various weekly and monthly events, and to sign on (comment) to be entered in other bloggers' giveaways, but I think this one is a lovely way to celebrate having achieved 100 posts on her blog.  I started a year ago and I'm not even close to that total (life intervenes, alas), but I have to admire her accomplishment, and I do like her midwestern sensibility, her sense of simple style and that of White Flower Farmhouse, as well.

It has been exactly a month and one day since I last posted, so I caved to a little pressure and finally took a few photos of the newly repainted guest bath, one of three in my urban home.  Strangely, this bath has more square footage than the other two and - are you ready? - it's in the basement!  It was built as part of the original construction during which several rooms were created as finished living space in the basement, including a large family room with a fireplace, a guest bedroom which was at one time was my room and is currently my office, this bath and wide hall connecting them with the unfinished furnace room and another small unfinished room with a long workbench, etc., so it is a circa 1958 bath.  It was painted twice since, I think, until I finally tackled it a week or so ago for a third go at new color. 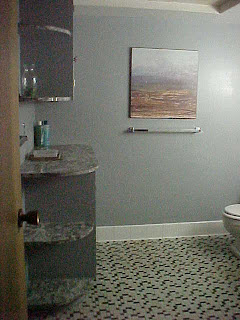 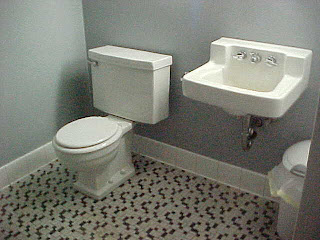 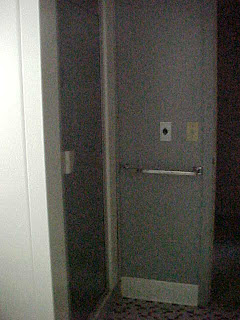 The floor is the original solid black and greyish-white speckled 1-inch tile, and, unlike the two main floor baths, it actually has sheetrock on the walls.  (The other baths are all tile - I mean classic, mid-century modern all tile, floor to ceiling, in baby blue and dove grey, and peachy rose pink with a hint of dove grey, respectively.)  I actually like this bath the best of all in the house.  It has built in cabinets (also original) topped on the counter and curved side shelves with striking grey/black/white marble-like Formica laminate. Who'd have guessed that 50+ years later it would actually be trendy again (well, almost trendy)? Apologies for the grainy quality of the last photo, but you get the idea.

I must say, after 50 years, it was fun to put a bright, crisp new face on the old bath walls, which were a sort of creamy, off white that desperately needed freshening.  Given the black and white of the tile and laminate counter, and the and bright, shiny silver chrome of the vintage chrome towel bars (also the originals, in like-new condition), I had aimed for a nice, soft, spa-like light grey - a sort of freshwater pearl tone, but I think I ended up with something a little closer to battleship grey!  I'd tell you the color name, but I actually mixed it myself from a gallon of an off-white and a quart of solid black - both reject cans I picked up at Lowe's for a total of $8!  I just put some of the off white in an empty paint can (which you also can buy at the store - so cool!) and added a bit of black until I reached the depth of color I wanted, then I added a bit more - a little too much more, but not so much that it didn't work at all, so I just used it.   Still, even though it was a bit darker than I originally planned, I very much like the effect of the darker grey.  It tends to define the walls a bit more and makes the room feel a bit warmer, I think.  I don't have time to redo them, so I'm going with it!

The only new items (apart from the paint) I added to the bath redo were four new door pulls I found very inexpensively, also at Lowe's, to replace the original chrome ones that for some reason just didn't quite work for me any longer: 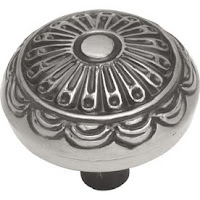 The knob is Belwith's Pewter 1 1/4-inch Southwest style and, at $1.97 each, they just seemed to incorporate neatly both the silver tones in the bathroom and the darker shades of black and create a little visual interest on the cabinet doors, as well.

On the wall is an interesting abstract landscape I picked up a couple of years ago at Marshall's.  It was inexpensive - $25 - and is essentially a photo reproduction of a painting, I think. I don't usually buy art that is so commercial, but something about the color and texture of this piece appealed to me at the time.  I never really had a great place to hang it, but it's so durable (just laminated on a heavy board - no glass or frame), I thought it would work nicely in this newly painted bath.   It's really just there for staging purposes, but maybe I'll leave it for the buyer as a "bath-warming" gift...lol.

I'm still hard at work spiffing up the house to show to prospective buyers, so here's hoping this little face-lift for the basement guest bath is just the ticket that convinces one of them that they just have to live there!
at 5:16 PM 2 comments: Links to this post