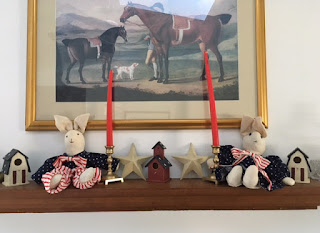 I'm shocked that it has been six months since I posted (on January 1), but I thought I'd better get "fire-cracking" here and share an image from my July 4th holiday mantel. Mr. and Mrs. Patriotic Bunny make their annual appearance with a couple of stars and red-white-blue birdhouses I've had for a few years. I can't even recall where I got them, but they've got stars on their roofs and stripes on the front of the two white ones for a bit of vintage Americana on this most American of holidays.

Can't promise that I'll be more prompt with postings with life full of busy days and these summer evenings with daylight lasting long into evenings. It's the time of year that I'm happiest...we've slogged through the long, cold winters and what seem to be shorter springs before the hot summer weather arrives. Spring this year was cold, then quickly hot, hot, hot and humid - as if it was August! - but things got sorted out in June and the weather for the past week has been perfect. Cool nights, warm days, low humidity...everything we've waited for! So I'm enjoying the outdoors and not spending much time in front of the laptop...sorry!

I'm headed off to a favorite country store nearby today, so I'll try to do a bit better on the posting schedule, but no guarantees. Until next time, enjoy your Fourth and have a safe, happy and healthy holiday! 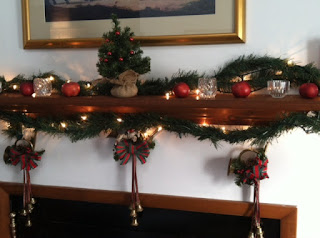 The arrival of the holiday season, while not exactly a surprise at Thanksgiving, was not something I was eager to embrace as early as Halloween, despite the retail industry's relentless effort to cause us to skip right over Thanksgiving (since one doesn't normally buy gifts for that) in favor of Christmas and zoom right into the holiday (read: shopping/spending) spirit. Accordingly, I resist all efforts to get into the "Christmas spirit" until December 1. It's just way too much red and green and holiday "cheer" before December's arrival, ignores the fact that it's still fall and, in some areas like the mid-south, still very much peak foliage season. To ignore that gives short shrift to autumn and the Thanksgiving holiday that I find equally worthy of our attention. Winter doesn't begin until December 21, so I express my resistance to the rushing of that season by not giving Christmas any significant attention until December. I won't decorate for Christmas until then.

As with Thanksgiving, my mantel is the primary focus of my holiday decorating. It's the area of my home that's most easily changed with the seasons and holidays, but in early December I also found a charming pre-lit faux evergreen 4-foot "pencil" tree in a nice, urn-like base at Goodwill for $12. There were several such trees available, but this one was the nicest, in my view, so I placed it by my front door (where there's a conveniently located exterior outlet). I put the lights on a timer, so it clicks on from dusk until about 11pm and gently illuminates the doorway, which makes it warm and welcoming, I think. 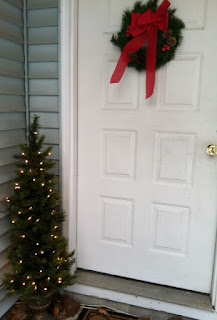 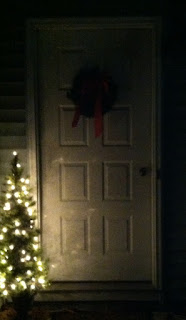 I also lucked into a huge "contractor" size bag full of faux evergreen garland at another local thrift shop - at least 200 ft or more - for a paltry $5.  Wow - that was quite a deal! Two of the garlands in the bag were illuminated, so I strung one of them around the mantle and added a little faux tree I got for $2, at the center, flanked by some votive candles in glass votive holders and small (real) apples. 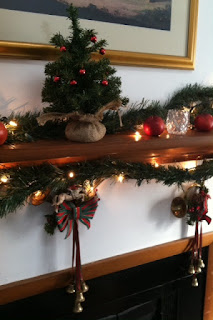 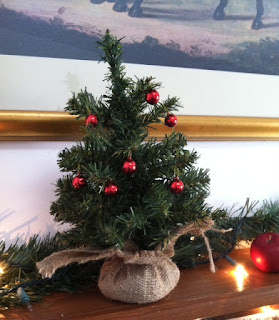 Below the mantel I hung two small brass faux hunting horns with faux greenery and berries, red-and-green ribbon and jingle bells embellishments at each end. In the center, I hung another small embellished brass horn enhanced with a small vintage jumping horse and rider ornament that a friend (and former classmate from 1st through 12th grade) gave me recently. She was going through some old holiday items while to trying to edit out of her collection of ornaments she no longer wanted to keep and thought I'd like this one and another small brass hunting horn -- she was right. As a horsewoman, I do tend to lean heavily in the direction of equestrian-related decor, which is especially appealing for the Christmas holidays. 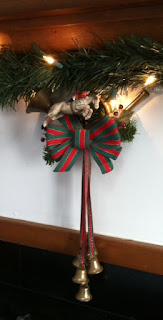 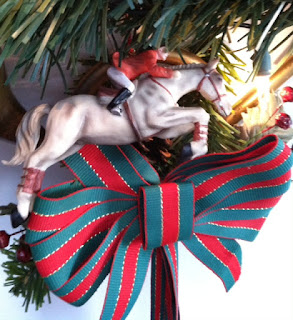 While some with more European leanings might extend the holiday season until mid-January, I lean in the direction of wrapping up the "holiday season" now that New Year's Day has come and gone. I'm packing up the holiday things this weekend and putting them all back in storage until next December. It'll be back sooner than we realize.

As with most of the Eastern U.S., our weather was unusually mild in December, with no snow until two days before New Year's Day, and temperatures were atypically warm -- 65 degrees on Christmas Day. (That was a treat for those of us who aren't huge fans of cold and snow.)  Now that the weather has reverted to more "normal" conditions for Northeastern winters, I'll focus on keeping the bird feeders hanging outside stocked with seed and use the time indoors sipping hot chocolate (yum!) by the fire, cooking, baking, and cleaning, sorting and tossing the unnecessary things that tend to invade and take up space in one's life. It's never too early to start on "spring cleaning"!

I hope you had very happy holidays, whatever version you celebrate, and have a most happy, healthy and prosperous New Year!
at 7:58 AM No comments: Links to this post