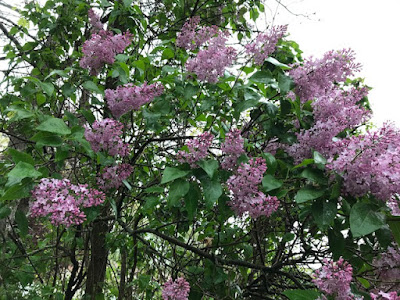 It's just past the middle of May and the lilac bush in my front yard is full of fragrant blooms. Oh, how I so love the scent of lilacs! These are the traditional, glorious lavender-colored ones - simply gorgeous and they smell divine! (The bees are enjoying them, too.) I've managed to maintain this long-established bush - in the years that I've been here, clipping the nearest branches loaded with blooms to ensure that more appear next year and beyond. They don't last all that long on the bush or in a vase full of water, but they are wonderful for the fleeting days they are here. They're just heavenly! 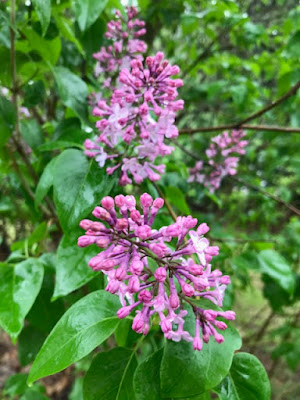 The coronavirus response marches on and I'm happy to report we're making a major dent in its progress in New York State. Some areas of life are being "re-opened" gradually and very carefully. We have only ourselves to blame if the virus cases increase as we slowly revert to a semblance of life as we knew it. Some industries and businesses have had their restrictions eased and are returning to operation, while others are taking incremental steps to get there - slowly, but surely.

Other areas of life as we knew it will not be returning this year - it's too soon and larger crowds cannot be accommodated safely, so no larger concert venues with extensive seating, and no audiences or fans at larger sporting events, though I'm happy to report that horse racing will be returning to New York on June 3 at Belmont Park after a six-week delay. Efforts also are underway to allow training in Saratoga, hopefully by mid-June, and eventually racing there, as well, starting as originally planned in mid-July through Labor Day if all goes well. Only essential personnel will be permitted on site - not even horse owners - but there is discussion on ways that owners might be allowed to attend when they have horses running. It would seem to be only fair as there is no racing if owners don't supply the horses to trainers to race them. Who ever would have imagined this would be an issue and needed to be carefully planned for it to occur? Wild, but very glad to see horses be able to race again.

Saratoga is known as a racing town and over the past 20 years or so the city and surrounding towns have enjoy a real estate boom, with properties values well outpacing the greater region. The good news this year is that with no fans allowed, the cost of hotel rooms and rental properties is expected to be a bit less costly because of the lack of demand compared to a typical summer racing season. That should bode well for those who must travel here for the racing each summer as it shouldn't be quite as costly for them. Either way, I'm glad the horses will be returning even if we can only see them from afar and on TV or online. 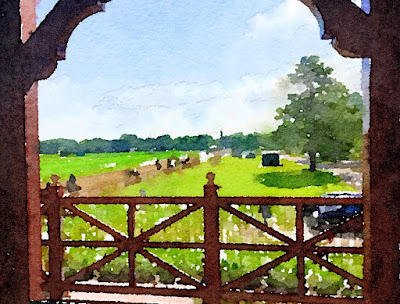 View east from the Whitney Viewing Stand, built in 2013 at the homestretch of  Saratoga's "Oklahoma" training track
to commemorate the 150th anniversary of horse racing in Saratoga Springs
The training track  and barn complex is located directly across Union Avenue from the renowed race course.
at 7:58 AM