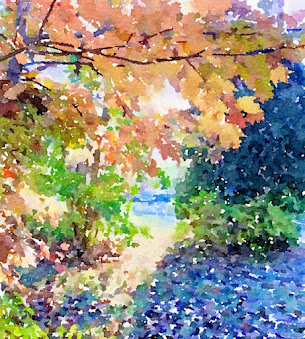 As if my last post already wasn't long-delayed, unfortunately, this one is even longer delayed. Life has been busy - that's really it. It's worth noting that autumn's arrival, or at least the changing leaves, have been long-delayed here in eastern New York, as well. We normally would see the hints of changing colors of the maples and oaks start to appear by mid-September, but there literally was no sign of that at all this year. If one can believe the local meteorologists, the heavy rainfall in summer (much more than average in July) and the warmer than usual temperatures (global warming, one would guess) tricked the trees into thinking summer was going strong in September and into early October. We would have had frost in October for sure, but we barely had any whisper of that all month. It was just this week - November! - before we had evidence of actual frost on the ground, but we hit 60F yesterday and we'll be up there, and maybe even a bit warmer, again today. I'll take it.

Don't get me wrong. I love autumn. It is my favorite season. It's not hot, it's not freezing (until later in November), and the snow, if we're lucky will remain at bay until December. That isn't always the case, but more often than not it is. The changing, now mostly changed, colors are simply spectacular here even when they're not as brilliant as other years. Some have characterized this year's colors as "meh"...and maybe that's so, but I simply look for the screaming, flaming brilliant reds and oranges that make their host trees to be all aflame. That's what I crave most from the fall colors and I found enough evidence of those burning bright colors to declare this autumn's colors as more than respectable. To be honest, we're lucky to have them. So many other areas of the country don't have our glorious hardwoods that put on such a colorful show every year. I could never live anywhere else in autumn. Not ever.

The image above is a watercolorized version of the view outside my front window. No complaints for me about autumn this year. No, indeed.