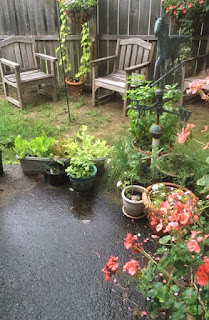 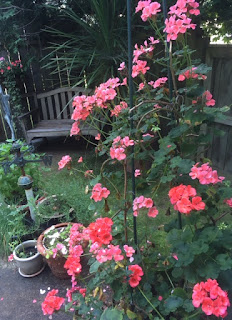 Despite the series of hot summer days with temperatures in the high 80s and low-to-mid-90s that descended here in upstate New York over the past month (I think I heard from one of the local meteorologists on television that we'd had at least 12 or 13 days of high heat and humidity), my side-yard garden on the patio and beyond seem to have weathered the worst of the heat. We've had quite a bit of rain over the past few weeks - several of the usual late July to early-ot-mid-August weather fronts came roaring in from the west and exploded over the region with the requisite pouring rain, occasional hail, strong winds, thunder, lightning - the usual gamut of severe summer storm ingredients.

A number of communities in the region suffered some serious damage, with power outages from downed tree limbs and a few massive trees that were literally upended right out the ground, roots and all. That's always stunning to see - sad, too, because they're usually big, old and majestic trees that just weren't a match for Mother Nature any longer.

I was always terrified of thunder and lightning as a child, but I eventually grew out of that and now I'm just appropriately cautious and far more wary of the damage that they can cause to property.  Fortunately, I've generally  managed to avoid all of the associated perils brought by the storms, though one roared through in the late 1990s that did some damage in the region and I lost a lovely old cherry tree at my former farm. It it took out a section of paddock fencing, but it wasn't anything more significant than that. (The horses were in the barn at the time, and they were safe and sound, but fairly awed the next day by the tree in their paddock that wasn't there before!) Thanks to help from friends (and a homeowners insurance claim), it was cut up, the fence was repaired, and the remnants of that tree made for some very nice firewood a year later, though, too.

It's always a relief when these sudden, torrential storms pass and things calm down and the sun comes out. Usually, the late afternoon or early evening light is gorgeous, and typically provides a lovely rainbow. We're not located in as "scary" an area as some parts of the country that are in "Tornado Alley" in the Midwest, nor are we subjected to the challenges of hurricane season in coastal areas, but our summer storms can be doozies, regardless, and the occasional tornado has been sighted. A few have touched down, and some have carved a visible path, so they're not totally unheard of, but they are fairly rare compared to other regions of the country. It's a good thing. We have enough to deal with in winter with snow and occasional blizzards, we certainly don't need repeated battering by severe summer storms and damaging weather.

The recent scorching heat and humidity always makes me want to avoid cooking over a hot stove - no cook top or oven activity to compound the already super-high temperatures outside. It's just too much and keeping the house cooler rather than warmer is always my goal during these hot sieges. I look for things that are cold or at least cooling in nature - salads and chilled soups. I've done some really super versions of gazpacho lately, and a chilled cucumber soup with plain Greek yogurt, a dollop of sour cream and dill from the late Irma Rombauer's classic "Joy of Cooking" - no serious kitchen should be without that book in its library. I've had mine for decades.

Tonight, it wasn't hot for a change, so I made another somewhat old-school favorite for dinner: shrimp with a fresh tomato sauce with crumbled feta cheese and another dollop of basil pesto (pictured below). The shrimp can be sauteed quickly (as I did this time) in a bit of extra virgin olive oil, with some minced roasted garlic (my own home-made version), but the fresh tomato sauce is always a bit more flavorful if made a day in advance, so the flavors have some time to "mature" in the refrigerator before re-heating for the sauce. I don't really have a recipe for this dish, since it's pretty basic and easy to prepare, like most the cooking I do these days (after the same aforementioned decades). Cooking is fairly instinctive for me at this point, rather than informed by formal recipes, though I might consult one of my cookbooks or options found online, if needed, to be sure I have a good idea of the ingredients and method involved if I'm not certain. I'm not one who adheres religiously to recipes, but I will be a bit more disciplined if it's a baked item that I haven't prepared before or tackled very often. 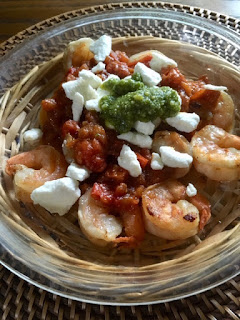 Hope you're staying cool this summer and finding great recipes to embrace again or to try for the first time.


PS: For those following, you'll notice that I've changed the blog's header image and the font colors again. It might be contrary to the tenets of good blog design, but, as a creative person, I like to have the header reflect the season, much as I like to have my home and environment reflect that, as well. Since we're in mid-summer at the moment, I thought a garden shot, based on the one shown in the text but cropped and enhanced with a watercolor effect app on my phone gives it a more impressionistic feel. Stay tuned as the header images evolve through the year in concert with the changing seasons. Cheers!
at 5:21 PM