Vintage Valentines and a Tasty Treat 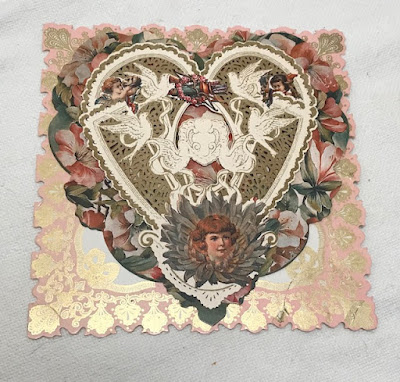 I thought I'd written here previously about vintage Valentine cards, but in reviewing the posts I've written in the past 11-plus years of blogging - yes, 11 years! - I only did a few February posts in total, and only one of those specifically featured a Valentine card, but it was 10 years ago! So, I am compelled to make treasured Valentine cards the focus of this post.

The one Valentine card that I did post back then was this classic, multi-layered vintage card (above) that I've had for years. I think my late mom gave it to me about 35-40 years ago or more, because she knew how much I liked those old-style lacy, Victorian-inspired cards, even if this one was newly printed at the time. It doesn't unfold, but it is three-dimensional, which makes it intricate with a lacy, gold filigree on the bottom layer, stylized flowers - lilies, mostly - on the middle layer, and cherub cupids with arrows and birds in a heart-shaped top layer. 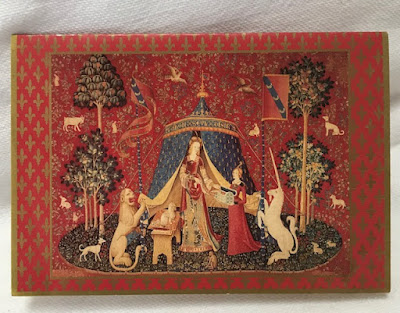 This tapesty design, on a card made by Caspari, is inspired by a historic, circa 1500 French tapestry titled "La Dame a La Licorne" ("The Lady and the Unicorn"). This portion is part of a group of six tapestries woven of wool and silk in Flanders that are considered among the greatest European works of art from the Middle Ages. It's exquisite as a card, so I'm sure the real thing must be simply stunning. I think I purchased this card myself, but that, too, was at least 30 or more years ago. 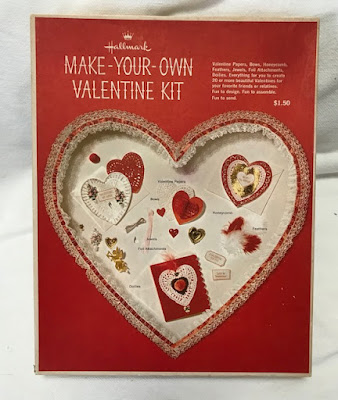 Pre-dating both of the cards pictured is this image of one of two boxes of Hallmark Make-Your-Own Valentine's Kits that I've kept for more than 50 years. This one is the newer one of the two as the cover of other one suffered some damage over the years, but I did tape it back together. Both of them were sold in the 1960s and I used most of their contents - honeycomb hearts, feathers, plastic "rubies" and other ornaments and textured papers - to make Valentines myself. I remember I used glue from a bottle of amber-colored LePage's glue for paper to stick the various bits and bobs onto the cards to create unique Valentines for my friends and family. My creative crafting life started early! Note that the cover of this box shows a price of $1.50! Although they're no longer made by Hallmark, one can occasionally find a box of Valentine components from the company, but you'll pay far more dearly for them now. I saw one more recent box than mine priced online at $20 plus shipping. No surprise there given how scarce they are now, but they were great fun to make! 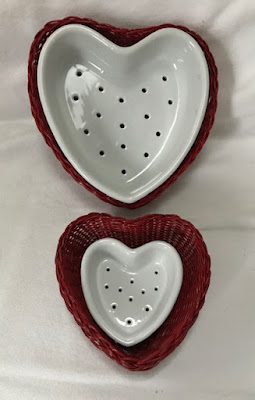 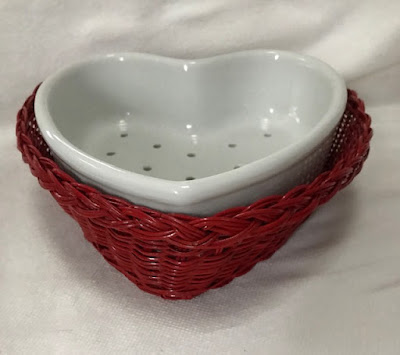 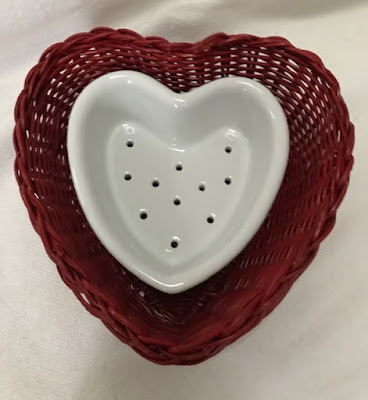 Finally, I had to share these wonderful French porcelain "coeur a la creme" molds. (Coeur a la creme means "cream heart" and is pronounced: "kur ah lah krem".) The perforated heart-shaped molds hold a cheesecloth wrapped chunk of softened and sweetened cream cheese - a classic French chilled dessert. The cheese mixture is folded into the mold, which is lined with cheesecloth, and placed in the refrigerator to drain (hence the purpose of the perforations) until it is chilled and the shape set. That results in the beautiful heart-shaped mound with the distinctive texture of the cheesecloth's impression when un-molded onto a pretty plate to slice and serve with berries or a drizzle of whatever sauce one desires. I have these molds in two sizes and discovered, when I took them out of the box the other day, that my set of pretty, red wicker heart-shaped baskets happen to be just the right size for each mold. Aren't they fun?!

For a straightforward and tasty recipe for coeur a la creme, I recommend this one from the inimitable Barefoot Contessa, Ina Garten, from her Barefoot in Paris cookbook.

I love that the treasures and keepsakes in my Valentines storage box always bring back such wonderful memories of childhood and the many years since.

P.S. If sweetness isn't your "jam", you also can tempt your beloved by making a savory version of coeur a la creme. Just eliminate the sugar and vanilla and add scallions and some fresh herbs, including dill and chives, coarse salt and freshly ground black pepper. Ina offers this tasty version - topped with Major Grey's chutney (from a jar - no need to make your own), that's perfect as an appetizer served with crackers: