End of a Glorious Reign 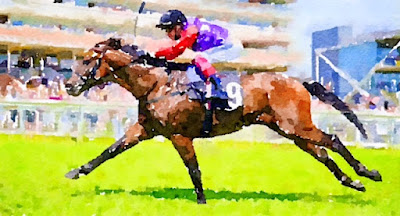 After my previous post honoring Her Majesty, Queen Elisabeth II, Great Britain and the commonwealth's longest reigning monarch, we saw several of her horses' riders sporting the queen's royal purple and scarlet racing silks with lovely gold braid closures on the jacket and atop the black cap in a few races held during that iconic Royal Ascot race meeting in mid-June. Sadly, she wasn't able to attend the annual 5-day meeting during the week at age 96 (!) during the celebration of her Platinum Jubilee celebrating 70 years on the British throne due to persistent "mobility issues" that been limiting her ability to move about comfortably in public which she had done for so many decades.

Fortunately, for those of us who love horses and have followed her involvement with them as a serious student of the animal and the sport of racing as a breeder and owner of Thoroughbred race horses, her interest in them remained keen and served at one of the few amusements to which she was dedicated privately for much of her life. More details of that can be found online, so it's worth exploring online her interest in horses, racing and a country lifestyle more broadly.

As the end of summer season drew closer, one couldn't avoid the news report on September 8 of the serious concerns for her health was announced Buckingham Palace, followed several hours later by the posting of the official notice of her death at her beloved, private country home, Balmoral, in Scotland.

She had lived a very long and full life dedicated, as she had promised, to serve the people of her beloved country and commonwealth. She was all about duty and embodied an impressively unwavering commitment to that noble task. No one before her did it as well or for as long.

Very few alive today knew a time when Queen Elizabeth II wasn't on the throne and it will be a very different world without her going forward. I will miss seeing her from afar and knowing that she was always there, whether performing her royal duties or enjoying a day at the races or at Windsor Castle where she spent weekends as often as she could, riding the countryside on her favorite Fell pony, Emma, well into her 90s, or Sandringham, northeast of London, where the royal stud is located, or not far at Newmarket, where some of her horses trained for racing. She even sent one over to run in the US on occasion, including her home-bred young horse, Call To Mind, won the Belmont Invitational Derby, a stakes race at Belmont Park on Long Island, in 2018.

Whether or not you favor the monarchy, hers was a constitutional reign, not a political or executive one, but it was a long and glorious one whose longevity won't soon be repeated.

Rest easy now, ma'am, and thank you for your long service and all you did.